WINDOWS TO A STORM

I am home after a long, long time
Home with my eyes open, fingers touching
all the various possessions I have gathered
gadgets and comfort zones and furniture and artefacts
which I can claim as my own delicately acquired treasures
by which I can measure the chronology of my life
the expansion of my desires, the fruits of my journey
the fruits of being me

I am being given a chance to see all this, in totality
I am being asked to take stock, like a king walking
through his palace rooms for the last time
knowing the enemy is at the gates
and will shortly be dragging him to the tower

But for me, perhaps, it will be the dungeons
because, I am told, in its last stages the virus feels like drowning
That’s why I am so eager to touch all that I see and all that I own
After all, I am not like the refugee who is driven out of
his home, his country, without his possessions

No, no; I have a country, I have family; I am a creature of plenty
I have one life and it’s good, it’s sufficient … from what I see

I don’t want to be like the refugee
at the mercy of the wind, the heat, the parched earth, the dry pond
plagued by memories of rape, humiliation, dispossession, denudation

I want to lie in my own bed, or die there, as the case might be
At least in the privacy of my own rooms I can travel
back and forth in time, over the chapters of my life
wondering why such a tacky ending

Or perhaps there’s a twist in the story: the turning point
before all is well again
You see here is where I can afford to dream
Here is where I can forget the intruder at the window
Here is where I can drop to my knees and confess
to lessons of humility, mortality:
This earth is not yours, nor has it ever been;
It was only given to you for safekeeping!
And now, if I have to be a coward, I would rather do so in my own home
With my own people, looking into my own mirrors, my own closets

Or, here is where I can say: I was done in by a virus
I was held in captivity by an ethereal, surreal chit of a virus
while the birds and the beasts roamed the earth freely

How frail am I and how deceptive my spirit
and yet it is the spirit to which I must return
If I have to justify this cultivated life of mine
If I have to hear the victory horn at my windows
The words of a song that invites me to step out again. 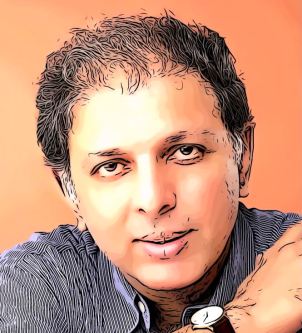 MURZBAN F. SHROFF is a Mumbai-based writer. His fiction has appeared in over 65 literary journals in the U.S. and UK. He is the recipient of the John Gilgun Fiction Award and has received six Pushcart Prize nominations. His short story collection, Breathless in Bombay, was shortlisted for the Commonwealth Writers’ Prize in the best debut category from Europe and South Asia, and rated by the Guardian as among the ten best Mumbai books. His novel, Waiting for Jonathan Koshy, was a finalist for the Horatio Nelson Fiction Prize in New York, and has been published in India and China. His collection of digital shorts, Fasttrack Fiction, serves up a varied mix of literary nuggets for the digital reader. The poems here are from his book-in-progress: No Shades of Gray. Murzban can be contacted on murzbanfshroff@gmail.com

Other work
Beyond Belief