On West Carson Street, skinny white boys
Slump in front of tattoo parlors
Scratching their arms. Girls
In short skirts take long pulls
On cigs, stand in groups
Smiling at the men who drive by
Hungry and shy…the realm
Of the hungry ghosts the Buddha
Calls it. I don’t know anything
About anything. But I once saw
A guy hit another guy
Over the head with a chair
And a cop with thick wrists
Put handcuffs on the brawler
And haul him off. And I saw
The bartender stomp the broken chair
And throw the sticks
In a dumpster in the alley
Where a junkie was shooting
Heaven in his tattoos.

My son wasn’t any of these guys.
He was the carpenter in the bedroom
Of an empty house down the street
Nailing a one by four to a two by four
Reinforcing a stud in a wall
That’s seen better days.
His long fingers hold the nails
And he swings the hammer
From his shoulder for more force.

My son was born blue. His shoulders
Were so wide, he got caught on the slide
Into the light. Or maybe
His long dark hair got caught
In the instrument listening
To his heart. Or maybe
He just didn’t want to start
This long difficult walk
To oblivion. But whatever
The reason, I know he was stuck
In the birth canal and when
He came into the light
The midwife massaged his chest
Until he gasped. And now, when I look
At his beautiful hands
Which can drive a four-inch nail
Into a board with two wacks,
I think of his tiny hands
Twenty seven years ago,
Opening and closing
As he took his first breath.

I don’t know anything about Jesus
But I’m happy my son
Doesn’t live on the street anymore.
Walking down Carson Street
I saw a beaten down boy
Begging for spare change,
But it wasn’t my son. I saw
A young man hand a small bag
Through a darkened car window
And the slim hand of a woman
Pass cash to him,
But he wasn’t my son. I don’t know
Anything about Hell, but I’ve seen
A junkie sitting on the sidewalk
His knees pulled to his chin
Staring at nothing — just the feet
Of people walking by,
Trying hard not to look at him. 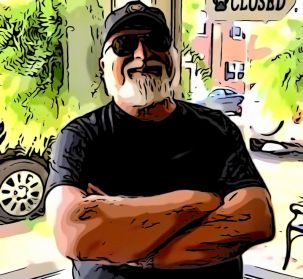 MICHAEL SIMMS has been active in politics and poetry for over 40 years as a writer, teacher, editor, and community activist. He is the founder of Autumn House Press, a nonprofit publisher of books of poetry, fiction, and nonfiction; Vox Populi, an online magazine of poetry, politics and nature; and Coal Hill Review, an online literary magazine. He’s also the author of four collections of poetry and a college textbook about poetry — and the lead editor of over 100 published books. Simms has an MFA from the University of Iowa and a Certificate in Plant-based Nutrition from Cornell University. He lives with his wife, Eva, and their two children in the historic Mount Washington neighborhood overlooking the city of Pittsburgh.

These poems are for Eva.