shuddered to a halt, yawned its maw
and began gorging on a mass of krill— or kill,

as I volunteer into the belly of the beast
like Jonah at Gun Hill enroute to 42nd Street.

In this metallic monster—the seal is hermetic.
I breathe breath of others from the Bronx

to Central Park. A cough alerts me like Amazon
spider monkeys hearing the muffled growl

tracking eyes. Then silence as I hold my
breath until forced to expel the shared

air and tension from other lungs. Lurching
to sliding doors, steps transition me from cave

to light. Gazing at the canopy of clouds, I wish
I was that rainforest monkey because at least I

would know I was safe, instead of walking
Times Square with an alarm clock in my chest.

Because of the execution of George Floyd,
I am haunted by the vulnerable ubiquity of necks
—it seems everyone has one—even babies.

My father missed showing me how to shave my neck
and I went to school bleeding.

In the backseat of a Buick at a vampire drive-in,
Tyra Graham left marks on my neck like sexual
graffiti. I looked like Bogart in The African Queen
emerging from the muck covered in leeches.

My wife leaves for work accessorized with a choker
—I avert my eyes.

Wolves do not fight to the death. The vanquished
submit by exposing jugular necks to a killing bite
never taken because wolves be they black, or white,
have no concept of color supremacy.

1880 to 1940 is known as the hanging years when
over five thousand Blacks were strung up by their necks
with picnicking audiences of hundreds cheering Christmas
trees decorated in hell.

A thick ten inch scar, like a noose, burns my neck
due to two surgeries where fibulas from both legs
were transplanted to my face replacing a jaw
compromised by a constellation of tumors. Both
times the procedures failed. But, I am grateful.
Unlike George Floyd, I can still breathe.


YOU LEAVE ME BREATHLESS

In Delhi, air quality is like smoking
50 cigarettes a day. One of its leaders
calls his city—Gas Chamber.

Vipassana meditation teaches observation
of your breath as it flows with your mind-
stream all the way to an ocean that does not wave.

CWP or coal workers pneumoconiosis
is severely affecting Appalachian families.
It is the disease that turns Whites’ lungs black.
By his daughters, George Floyd was needed. He was kneed
in the throat by cop Chauvin for almost nine minutes. Chauvin
continued to adjust his body for better torque and pressure
of his weaponized patella. Sir, please the knee on my neck, I
can’t breathe. Don’t kill me. Then he cried for his dead mama
for he knew from seeing her, he was just a breath away.

Lying on a metal table looking up at the synthetic sun of surgery lights
—people in masks put one on me, as well. Breathe deeply they say, and I do. 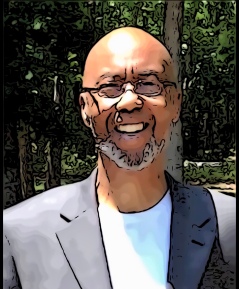 Cole Eubanks is retired as a public school teacher from the Philadelphia (PA) and Atlantic City (NJ) School Districts. He lives in Mays Landing, NJ. Cole’s work can be found in F(r)iction, Murphy Writing at Stockton University, Poets against War, The Journal of Baha’i Studies, Apiary, Nick Virgilio Haiku, and the anthologies, Not Our President 2020, Love & the Pandemic, and National Haiku Day.

Link to Table of Contents