Syracuse is a city of cloud. Beautiful cumulus clouds in great variety and height. The Dome on campus is a puffing cloud over a sports arena. “That’s the Dome,” people say. Every store and grocery sells orange and blue Syracuse University gear, Orange everywhere. Hats, jackets, sweatshirts, t-shirts, key-chains, bumper stickers. Even at Wegman’s, so you don’t have to miss a game day anytime if you need one. At the Dome itself or on your TV, like my dad prefers in his old age. The clouds lie over every part of it. The Fair Grounds that host the State Fair since 1841, the parking lots of parks and trails, the glistening bodies of water of the city—Erie Canal and Green Lakes, and not far off, all 1,000 islands. Green Lakes State Park with its mysterious, uncanny lakes that reflect the clouds like a mirror—your eye can tell the difference but your camera phone can not tell which is real–the above or the below.

Green Lake and Round Lake are anomalies in the whole world, only a handful like them across the planet. This is the Syracuse you know. Deep lakes that don’t turn over. That hold on their bottom layers a colder level of water, that hold things you will never know unless you plunge its depths, but then you would never come back up. The Loch Ness Monster could be hiding 200 feet down. You never know. Clouds over schools and the old abandoned downtown that’s just a bus station now where my grandfather’s bicycle store once stood. My father sold it to Urban Renewal and got a good price, then they tried to claim it wasn’t worth that. “Then you shouldn’t have charged me so much property tax!” he said. “That’s how you valued it.”

Clouds over the newer, hipper part of downtown–Armory Square. Urban Renewal never quite happened. Clouded over by conscious. Dad moved the bicycle store to Erie Boulevard near our suburban home. Clouds over the suburbs and our housing tract and the Erie Canal. Clouds over the outskirts, the hick towns; some would say we were hick. The high school. Tuxedo shop. Historic Genesee Street and the Wellington house. The water wheels at the lochs. There was the Glen Loch, the Brae Loch. Now the Glen is crumbled. Only part of the water wheel remains. Clouds over the waterwheel. I went to Glen Loch for prom dinner. And Denny’s for late-night breakfast with friends. We were seniors then, and we could do anything we wanted. All the separate groups dissolved.

My mother and father driving me past the border of the city through the outskirts and on to Binghamton for college. Dropping me off at my dorm. My mom made my bed for me and helped me hang up clothes in the closet I shared with a new roommate—she had dozens of wool sweaters her mother knitted for her. And then, goodbye. And I was left in a different city, not far from home, with the same clouds blowing overhead.

SnoTop ice cream. The place we dream of, only open in summer. As it always was. But I can’t go there in winter. When I visit now from California, I drive past it in the snow, wishing, the giant cone on its roof a taunt. My parents moved to Assisted Living a block from there and it was a taunt every trip back and forth, my mother there only four weeks before she went to the hospital and never came home. My dad moved out again. He did not need the assistance.

Clouds over the Swan Pond next to SnoTop. The swans in the front pond. Ducks in the back. Always two of everything. One spring someone made off with the swan eggs from the nest. The town was outraged. A heavy rain falling from the sky. The clouds at last releasing their great load upon the earth, upon the pond. Who, who would do such a thing? Tearing their hair out. What did they do with the eggs? There was mourning like you’d never seen. Newspaper articles, as many as the time someone put an alligator in Jamesville Reservoir and it took a whole season to catch. How long had it grown there before someone noticed? Put in small, a baby. And it survived. A mystery like Glen Loch, like Loch Ness, like Green Lakes. Clouds before you all. 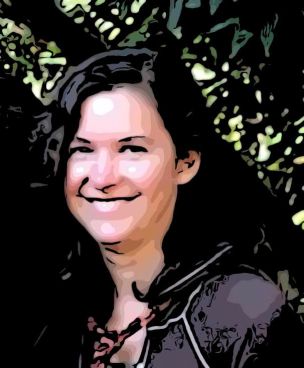 In-between, she lived in Spain, traveled back and forth to an island, and had a successful career editing bestselling middle grade and young adult fiction, becoming known for digging into the bones of a story to bring out the best in it. All along the way, she kept writing.

Lisa lives in Belmont, California with her husband and two children. Her son and daughter are both avid readers and budding storytellers, as well as frequent subjects of her imagination. She’s a member of the California Writers’ Club, and Women’s National Book Association, where she served on the board of the San Francisco chapter for several years.